The July Junior Gippstar Award Winner is Ainsley Trotter of Longford for her achievements in her sport of Swimming. Ainsley competed in and Won 11 years/under 50 metre butterfly at Australian School Swimming Sports held in Melbourne against all the best age group swimmers in Australia.
Broke the 11 years/under Victorian Country record in the heat and again in the final. Well Done Ainsley!

The July Open Gippstar Award Winner is Alex Vuillermin of Morwell for her achievements in her sport of  Rowing. As part of the PR3 mixed fours Alex secured two silver medals at the Gavirate International Regatta in Italy and now has her sights set on a haul of similar proportions at next month’s World Championships in Austria. Great achievement Alex! 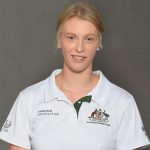