The June Junior Gippstar Award Winner is Xanthe Wade of Stratford for her achievements in Equestrian. Xanthe competed at the Equestrian Victorian State Interschool Championships and won the Nan Macathur Award for the Champion Overall Individual Primary School Rider. She competed in a range of disciplines including showjumping, novelties and handy mount against approximately 255 riders to be awarded the overall championship. Xanthe also competed in the Improvers section, at the Geelong College Interschool Showjumping Competition, and achieved 3rd Place overall. Her results at the Equestrian Victoria State interschool Championships were Champion Novelties Grade 5 & 6, Champion Handy Mount Grade 5 & 6 and Reserve Champion Showjumping Combination. Xanthe has also been selected on the Victorian team for the Pony Club Australia National Championships in the Sub-Junior Tetrathlon and Sub-Junior Showjumping Teams to be held in September 2021 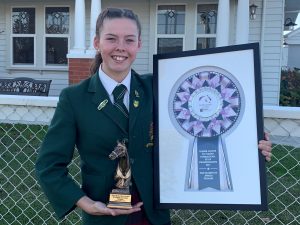 Congratulations to all our winners!

July – August nominations for Gippstar will close on 5th September 2021

Please note that you can nominate for the following categories as well:

– Team of the Year

– Club of the Year

These Annual awards can be nominated at any time during the current Gippstar year.

If you would like to recognize the sporting achievements of a Gippsland athlete or any of the above categories, nominations can be made online at the Gippsland Sports Academy website www.sportgippsland.org.au.