While many took off for the Melbourne Cup weekend, the Gippsland Tennis Academy Tennis Players headed up the Calder Highway to Bendigo to play in this year’s Inter Academy Challenge.
This event sees the Gippsland Sports Academy (GSA) play against the other 4 Academies in country Victoria (Barwon, Bendigo, South West and West Vic). Out of the 16 GSA athletes 11 participated.
Play on Saturday was doubles where GSA had a strong showing. Pairs had to play up top to six matches, with all but 1 pair having winning records but Johnston/Collison and Nicholson/Goold where the stand outs on the day.
Day two was singles day. Players played 3 singles matches and again GSA looked strong from the outset, and by the end everyone came away with a winning record but Nicholson won all of he’s 3 sets.

When the results were read out Gippsland came out as winner closely followed by West Vic in second and Bendigo in third. Self-appointed Captain Sam McGregor lifted the plaque and thanked everyone, .

Big Congratulations to the team but special mention to Matt Nicholson for going the weekend undefeated. 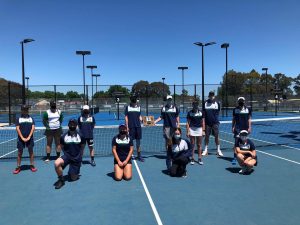